Last summer I had the opportunity to return to my home town of Checotah, Oklahoma. It's not far away but it had been years since I had last visited. Little had changed, though a Wal-Mart had been added to the west of town. Main Street still looked the same, only many of the store names had changed. Somehow it looked so much smaller than I remembered it to be. The High School looked the same, so did the gymnasium and the grade school just down the block. I had come home.

The feeling of nostalgia was so great, I nearly wept. I could not wait to see my old home place. In my mind, my mother and daddy would be there to welcome me. They have been gone for 17 years and sometimes I miss them so much.

As we drove the familiar highway home, I pointed out various homes where my friends grew up. George listened quietly, occasionally making a remark or two. "George, Vonda Creekmore lived there and her grandparents lived the next house over. At the top of this hill was a grocery store, it was a mom and pop store with the people living in the back of the store. Their kids rode my school bus."

"Make a right turn up there George, you see that dirt road?" As we drove I knew when we came to my Daddy's land. The fence posts that he had worked so hard cutting had mostly rotted away to nothing. What was left was held together by sagging pieces of wire. I wanted to touch them, but could not because the weeds were so high. You see, my Daddy had touched them last. It would have been wonderful to put my fingers where his had been.

The field that once held soybeans was filled with tall weeds but in my mind I could see us standing there in the soy bean fields. "George, The soy bean plants grew seven to eight feet tall that year, we had never seen soy beans so high. I have a picture of Momma, Daddy and I standing in the midst of them. I think Donna was there too." George had heard all of this before, he just nodded and kept listening to me rattle on.

The last mile was no longer the wide gravel road I remembered, it was now a mere drive. You could tell it was no longer maintained by the county. Grass grew in the middle and along the sides. It was now barely wide enough for two cars to pass. The trees' branches were draped in the middle, creating a tunnel of sorts with spotty sunlight shining through.

"George, Boots Emerson's house was over there. He had three kids that rode the bus with me. I remember his oldest son asking me to the prom. I was so embarrassed that he asked me. He was the last person I would have went to the prom with and he asked me in front of the boy that I wanted to go with!"

"There's our drive way", it was now protected by a large gate with a no trespassing sign on it. The mail box was gone, I longed for it to still be there so I could look inside just in case there would be a stray piece of mail.

The drive way to the house was a quarter of a mile long. It was curved in the middle over a small creek. The drive way was now just part of the pasture, but you could tell that it was once a road; nature had nearly taken it back.

Our house was partially standing though we could not get close. The weeds were so high and I knew there would be snakes. Oh how I wanted to go inside and just close my eyes and feel the house. I imagined that I could hear my mother calling "Betty" and my laughter as I waited while she continued to call me. Finally shewould call all three names "Betty Sharlene Carlton!" Then I knew she wasn't fooling and I had better get home.

Instead I pointed out where the barn and chicken house were located and mothers rose bush. Oh how I would have loved to have a clipping of it.

As I stood there with George's arms around me I felt a sense of loss, but also a sense of peace. "It's ok," he said. I had come home, but knew I would not come back.

Life as I remembered it was no longer; only in my memories. 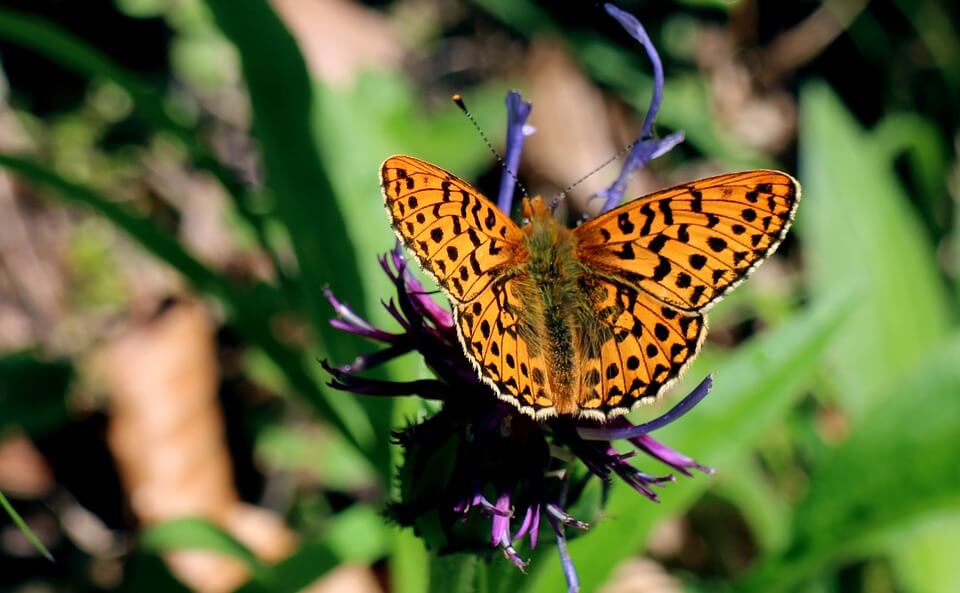 A butterfly is a flying flower;
A flower a tethered butterfly.﻿

Click HERE to learn more about grief; what to expect, how to deal with it, and how to help others through it.