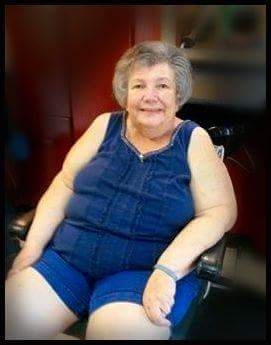 Alice May Nelson, of Camp, Arkansas, daughter of the late Harry Bernhady and Genevia Cook Bernhardy List, was born November 9, 1946, in Kansas City, Missouri. She died July 21, 2016 at Fulton County Hospital in Salem, Arkansas at the age of 69 years 8 months and 12 days.

She was united in marriage to William "Bill" Nelson May 11, 1973 in Kansas City, Missouri. During her working years she worked in the food service industry, she was such a sweet and kind hearted soul this type of work was perfect for her. She loved to sew, quilt, and doing arts and crafts. She very much enjoyed being apart of the Faternal Order of the Eagles. "We your family, miss you in the house you used to be. We wanted so much to keep you but God willed it not to be. Now you are in God's keeping. You suffer no more pain. So may dear God take care of you until we meet again." She was of the christian faith. She will be missed by her family and so many others.

Survivors include her husband of the family home; her children: Raymond Underwood and wife Angela of Turney, Missouri, Dwayne Underwood of Kansas City, Missouri, Angela"Angie" Raines and husband Curtis of Camp, Arkansas, and Robert Nelson of Camp, Arkansas; grandchildren: Dillon, Dalton and Drake Raines, Angelina and Robert Nelson, Jessica Morris, Nicholas and Nathan Underwood, Crystal Fields, and Victoria Thornton; great-granddaughter: Adrianna Calhoun; one brother: William Bernhardy of Independence, Missouri. She is preceded in death by her brother: Edward Frank Bernhardy; and her father and mother.

To order memorial trees or send flowers to the family in memory of Alice May Nelson, please visit our flower store.