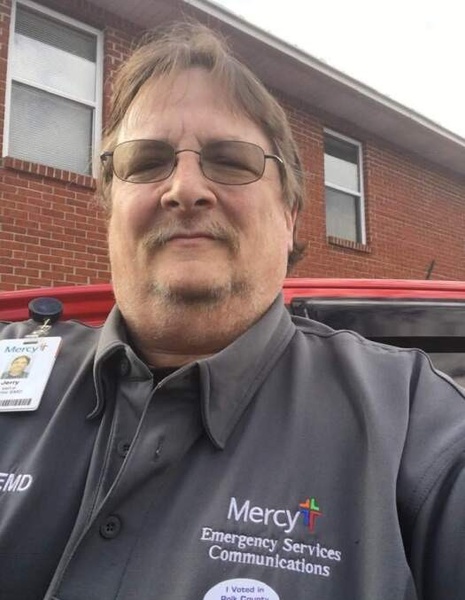 He was born in Independence, Missouri on October 31, 1955, son of the late Drexell and Carolyn (Ford) Bell. Jerry spent his life as a loving son, brother, husband, uncle, and friend. He was united in marriage to Leona Wood on March 18, 1989 in Naples, Florida. Jerry was employed with Mercy EMS in Springfield, Missouri. He joined the Mercy team in 2007 as a Paramedic in Lawrence County then transferred to his current position in the Emergency Services Communications Center. Jerry had a servant’s heart and served the people in Missouri in different capacities. He served as Fire Chief, Paramedic, Firefighter, EMT, mentor and teacher. He loved his family and friends very much and will be missed by all.

Jerry is survived by his wife, Leona Bell of Salem, Missouri; siblings, Cindy Small of Holt, Missouri, Janet Bell of Holt, Missouri, Carole Bell Brotherton along with her devoted husband and loving brother-in-law, Dale of Belton, Missouri and David Bell of Morriston, Arkansas; nieces; nephews and a host of friends.

He was preceded in death by his parents, Drexell and Carolyn Bell and Grandma Joe.

Graveside services will be Thursday, April 1, 2021 beginning at 10:00 AM at Morriston Cemetery in Morriston, Arkansas with Bro. Tom Doty officiating.

In lieu of flowers, memorials may be sent to FNBC for the family in Jerry’s name.

To order memorial trees or send flowers to the family in memory of Jerry Bell, please visit our flower store.