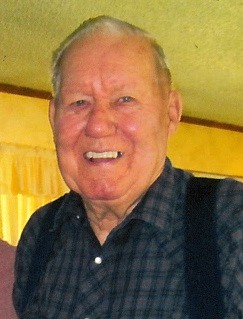 He was born in Heart, Arkansas on March 9, 1936, son of the late Jessie (Estes) and Claude Hall. Noble spent his life as a loving son, brother, father, grandfather and friend. He worked as a heavy equipment operator in the construction field. He was the union operator for the Local 101 out of Kansas City, Missouri and was also with the Local 513 out of Springfield, Missouri.

He was preceded in death by his parents, Jessie and Claude Hall, sister Eulalie Humphrey, brother-in-law Oliver Humphrey and niece Donna Sue Martin.

Funeral services will be Sunday, October 8, 2017 beginning at 2:00 PM at Doty Family Funeral Service Chapel in Salem, Arkansas. Burial will follow the service at Burk’s Chapel Cemetery in Camp, Arkansas. Visitation will begin at 1:00 PM until service time.

To order memorial trees or send flowers to the family in memory of Noble Dale Hall, please visit our flower store.
Send a Sympathy Card